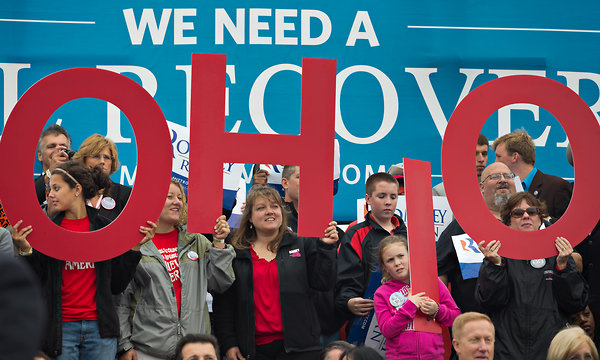 From Nate Silver’s post this morning in the NYT:

“Mr. Obama’s narrow lead in Ohio accounts for the bulk of his overall advantage in the forecast right now. Were Ohio decreed to Mr. Romney by fiat, Mr. Obama’s chances of winning would decline to 57 percent from 70 percent in the forecast.“

Come on, Ohio, the whole country is depending on you. I actually think Ohio is more important to obama than it is to Romney. Romney can afford to lose Ohio as long as he wins Wisconsin, Iowa, and Virginia, which he clearly is on track to do in any event. obama can only afford to lose Ohio if he instead wins Virginia or Colorado, as well as Wisconsin, Iowa and Nevada (not going to happen). If Ohio goes to Romney it will probably mean a popular AND electoral vote landslide of Reaganesque proportions. By the way, this is a fun porn game — click on the states to make your own predictions about the electoral vote outcome HERE. The NYT has a super one too. I may never get back to work.

How anyone can say that obama won the debate last night is beyond me. Yeah, he did okay (using the soft bigotry of low expectations here), but Romney was clearly more the master of facts, figures, and ideas. He also came across more calm, measured, and likable. obama isn’t even likable enough anymore. Or, as Dafyyd Ab Hugh (what?) put it,

“Romney carefully painted a portrait of presidential bearing and gravitas, knowledge and wisdom, specificity and the political chops to carry it out, and the courage to point out that Emperor Obama has no clothes. Since that last clause was demonstrably true, the end result is — well, not quite inevitable; it ain’t over till the fat lady votes — but extremely likely: Mitt Romney is going to win this election.”

The one thing I am REALLY gonna miss now that the debates are over is the Frank Luntz focus groups. Pure. Comedy. Gold. If you haven’t seen the Lesbensex who starts screaming and spitting you really owe yourself to click on that LINK and watch the video. It’s like an SNL skit. Except not because it’s actually REAL.

PPP (democratic polling company) found a majority of Independents who watched the debate (55%) think obama won. But most of them are going to vote for Romney.